Portfolio > Once this was a Roman villa 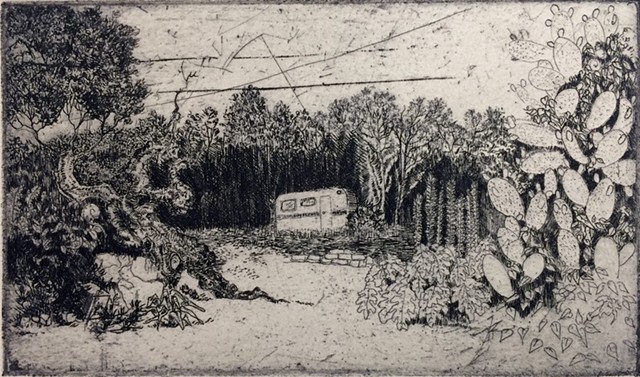 This print was included in the 2017 Southern Graphics Council Invitational Portfolio, "Homewward".

“Homeward” is a vast word that implies transience, displacement, distance, and the closing of a chapter of one’s life in which one was taken away from home, whether by adventure, exigence or exile. It also implies a search for something that resembles home, whether it be a childhood home or a new place to settle.

In "Once this was a Roman Villa", the site of a true Roman villa on the periphery of the small Sicilian village of my family’s origin has been completely taken back by nature, such that all traces have been erased. The mosaic pavements from this site have been placed in a museum in town, and no one seems to recall precisely where the villa once stood. Now, in its place, along a dusty cowpath, I find only a small camper that seems abandoned as well. I imagine what once was, from one era to the next, and reflect on the way even the town itself is inhabited by phantasms of the past, every other house a gaping maw, abandoned, crumbling. I wonder why I am compelled to return there year after year. The journey is long and fraught with complicated feelings. Why did my family leave? What would my life have been had we stayed? Never fully where I am nor where I'm going, the story of children of immigrants in many ways is ubiquitous. The house of my family is one that is still inhabited, if only seasonally, at least for now. With each passing year I marvel at the way things change and yet fortuitously or sadly don't. The cool marble steps I sat on as a child feel the same under my thighs. I retrace the veins under opalescent white.

Perhaps it is because when on a dark night I surreptitiously walk the cobbled paths of the Siculan settlement being excavated on the slopes below town, I feel that perhaps I am on ancestral land. I marvel how my flesh, when tanned with the sun, becomes the same color as the stones all around me - warm sepia and pink marble bruises.