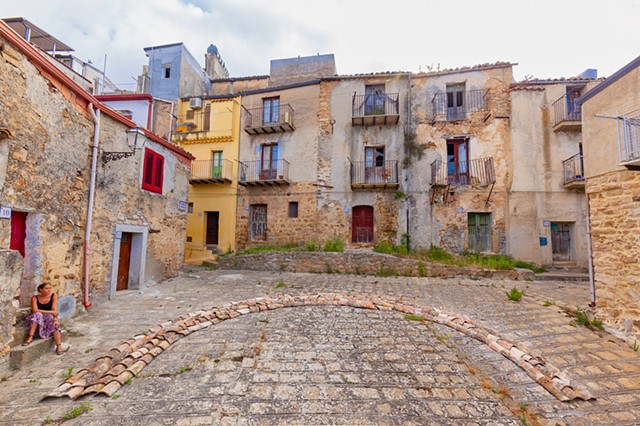 Serena Perrone's work falls under the umbrella of Expanded Printmaking. Her studio practice now routinely includes installations of various works utilizing photography, casting, hand-built ceramics, dimensional and serial prints. Her work is often in direct response to landscape in literature and poetry, and her own writing and text-based work is also an important component of her research. She engages with the nostalgic landscape, utilizing framing devices resulting in work that references the hidden, 'almost-seen', and vernacular storytelling through layered pieces exploring the problems of nostalgia and the poetics and the perils of place.

She is embarking on a cross-disciplinary exploration of sites of personal significance, and theaters of cultural identity - as the daughter of an immigrant and as a dual US/Italian citizen, she looks to these landscapes and complex contradictions within each to understand the relationship with place, past and present, and enchantment and disenchantment. Places of passage, islands and volcanoes, distances and framed views are common in the work as she attempts to elucidate the indelible traces of history on the landscape, and the traces of a landscape on the character of the people who inhabit it. She focuses on scenes that invite both furtive and explicit looking, whose mystery lies in the obfuscation of location and time, and recognizes these through work that relies heavily on process, workmanship, and decoration.

Born in St. Louis to an Italian father and American mother, she is a dual-citizen and splits her time between the United States and Italy. A graduate of the Rhode Island School of Design with an MFA in Printmaking, she lived for many years in Philadelphia and Upstate New York before relocating to Atlanta in 2019. She is currently the Assistant Professor of Printmaking, Tenure Track at Georgia State University. Previously, she was the Assistant Professor of Printmaking and Drawing at Pratt Institute's upstate campus at Munson-Williams-Proctor Arts Institute in New York, and a Visiting Critic at RISD. She is the co-creator and Director of Officina Stamperia del Notaio, an international multi-disciplinary artists' residency program and printmaking studio in Sicily. Her work is represented by Cade Tompkins Projects, Providence, RI.